Reflecting on 50 years of MTFC

From a milkstand in 1969 to today's four-pitch grounds and clubhouse, long-time club stalwart Lenny Murphy looks back on MTFC's 50-year journey. 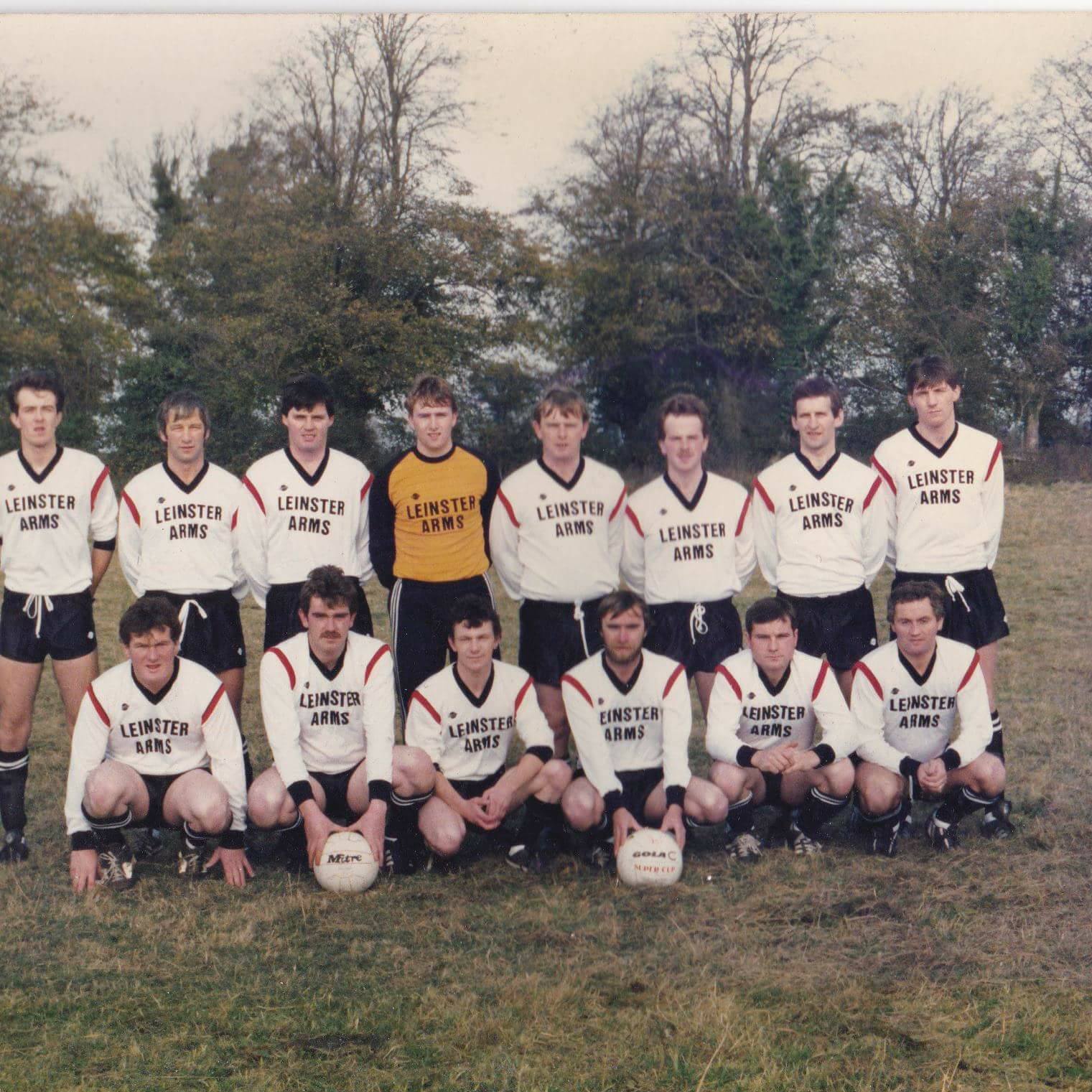 In this our 50th anniversary year, we take pride in our many achievements over the decades. From humble beginnings during a period where we encountered many obstacles along the way, we finally overcame them all to reach a pinnacle that we could never have envisaged all those years ago.

Celebrating 50 years by hosting an FAI Senior Cup tie in August 2019 for first time ever on our home ground against Waterford FC, was a special occasion and a proud day for the club.

Many changes have occurred during that time and we are heavily indebted to all who helped us along the way.

Unfortunately, many former club stalwarts have since passed to their eternal reward but can rest in the knowledge that their past efforts have played a big part in our achievements to date.

Maynooth once had two clubs playing in Leinster League competitions. The present club was formed from the merger of Maynooth St. Mary’s and Ballygoran United. Legend has it, that the first meeting took place at Feeney’s milkstand on the Celbridge Road.

In the early days we were very much a transient club having to move at regular intervals when pitches were no longer available due to housing developments.

Today’s club was formed from the merger of Maynooth St. Mary’s and Ballygoran United in ‘69. Legend has it, the first meeting took place at Feeney’s milkstand on the Celbridge Road…

Rockfield, Railpark, Carton Court, the Harbour Field, St. Patrick’s College, Geoghegans’ field, Moyglare Road and the Dublin Road lands opposite the old Maynooth Mart… They all featured in our journey to today’s modern facilities at Rathcoffey Road, where top-class changing rooms, showers and four pitches are the envy of many clubs.

All of this has been achieved through a labour of love by so many dedicated members who can now see the fruits of their efforts. 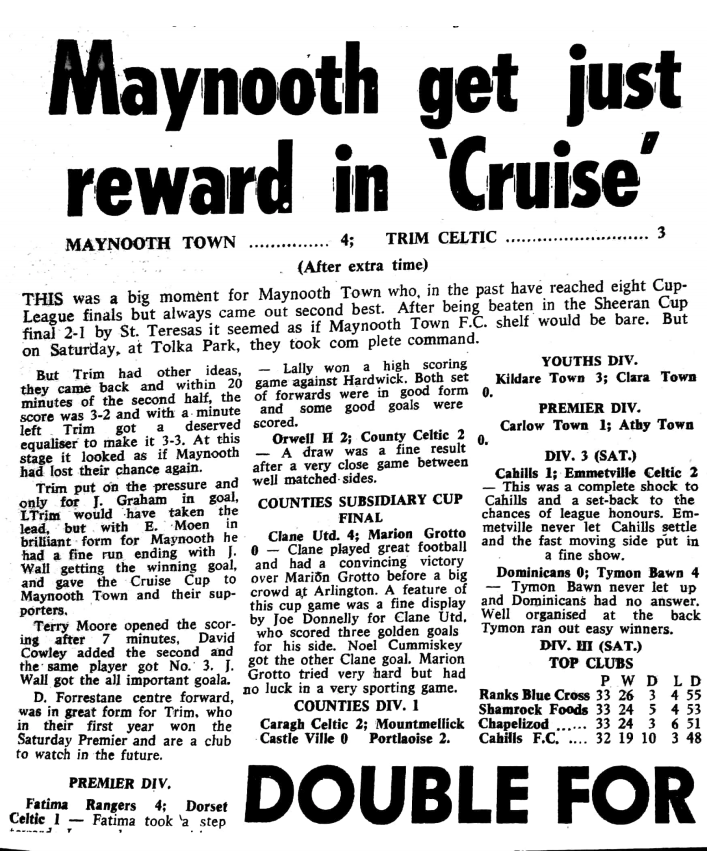 On the football field, after a tentative start to our competitive campaign, the club began to find its footing and achieving success.

Some of our players went on to play at the very highest level. David Cowhey signed for Bohemians as an 18 year-old right winger.

Below is an excerpt of the January/February 1978 edition of the Maynooth Newsletter, reporting on Cowhey’s signing.

Bohemians’ then-manager, Billy Young was quoted at the time as saying:

“David has a big future ahead of him and we have been chasing him for along time.“

The late Liam Devine had the football world at his feet when serious illness cut short a career, which seemed to have no limits. Plying his trade with Shelbourne and Dundalk, Liam was in the mould of an old-fashioned winger or in midfield, where he showed an intelligent flair. 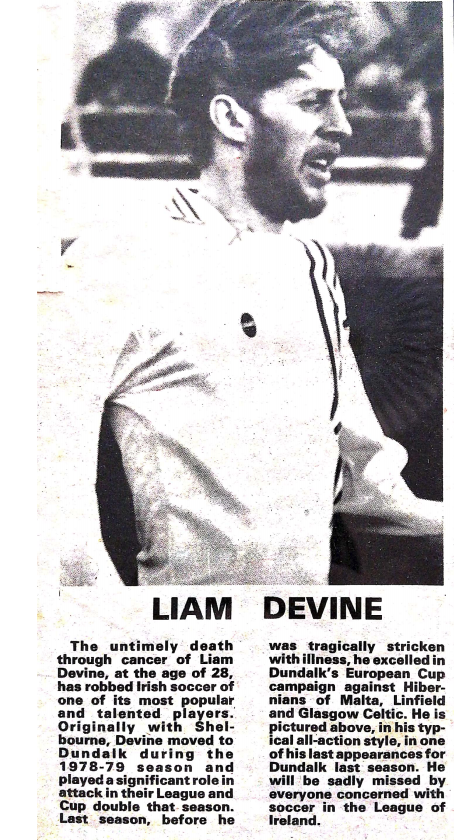 Liam played in the League and Cup double-winning Dundalk team in 1978-79 and excelled in Dundalk’s European Cup campaign, scoring against Hibernian Malta and Linfield, and featuring in the 3-2 defeat by Glasgow Celtic.

Winning the Polikoff Cup in 2014, defeating Liffey Wanderers 1-0 at the Belfield Bowl, was a huge achievement and the springboard for our entry to the Leinster Senior League.

Since then the collaboration and partnership at senior level with Maynooth University has led to promotion to the top flight of the LSL. This partnership has created pathways for our young players to play at the highest level. And who could ever forget Maynooth University Town winning the FAI Intermediate Cup in 2018? Defeating Firhouse Clover 4-1 after extra time.

From Feeney’s milk stand to the Aviva Stadium, what a journey.

We’re collecting and digitising all the MTFC newspaper clippings, match programmes, photos and paraphernalia from 1969 to today that we can get our hands on. And we need your help!

If you have a photograph, a story, a match programme, a press clipping, a game that stood out, players you admired, a reflection of your time with Maynooth Town FC – please share it with us.

Get in touch: [email protected]

Check out our gallery of MTFC moments throughout the years.